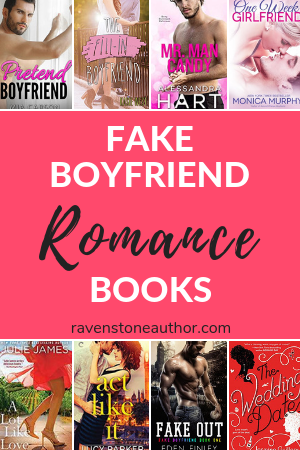 To me, fake boyfriend romance books are a great bit of fun. The main characters usually have great chemistry right from the start, and I enjoy those moments where they’re wondering if what’s happening is for real or not. And the key to these stories – of course – is that they have to get together at the end. Otherwise I’m not a happy camper. 🙂

The Wedding Date by Jasmine Guillory 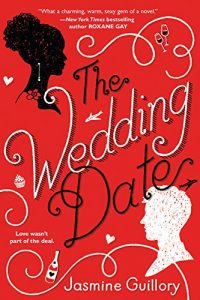 A groomsman and his last-minute guest are about to discover if a fake date can go the distance in this fun and flirty multicultural romance debut.

Agreeing to go to a wedding with a guy she gets stuck with in an elevator is something Alexa Monroe wouldn’t normally do. But there’s something about Drew Nichols that’s too hard to resist.

On the eve of his ex’s wedding festivities, Drew is minus a plus one. Until a power outage strands him with the perfect candidate for a fake girlfriend…

After Alexa and Drew have more fun than they ever thought possible, Drew has to fly back to Los Angeles and his job as a pediatric surgeon, and Alexa heads home to Berkeley, where she’s the mayor’s chief of staff. Too bad they can’t stop thinking about the other…

Fake Out (Fake Boyfriend Book One) by Eden Finley 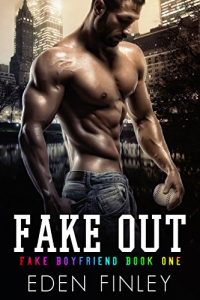 The reason I rarely go home is three simple words: I’m a liar.

When the pressure to marry my childhood sweetheart became too much, I told her I was gay and then fled to New York like my ass was on fire.

Now, five years later and after a drunken encounter, I find myself invited to her wedding. And I have to bring my boyfriend—the boyfriend who doesn’t exist because I’m straight.

At least, I think I am. Meeting the guy I’m bribing to be my boyfriend for the weekend makes me question everything about myself.

When my sister asks me to pretend to be some straight guy’s boyfriend, my automatic response is to say no. It’s because of guys like him people don’t believe me when I tell them I’m gay.

But Maddox has something I need.

After an injury that cost me my baseball career, I’m trying to leave my playing days behind and focus on being the best sports agent I can be. Forty-eight hours with my sister’s best friend in exchange for a meeting with a possible client. I can do this.

I just wish he wasn’t so hot. Or that he didn’t kiss like he means it.

Wait … why is the straight guy kissing me?

*Fake Out is a full-length MM novel with no cliffhanger.*

One Week Girlfriend by Monica Murphy 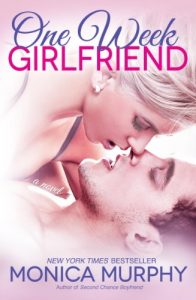 Temporary. That’s the word I’d use to describe my life right now. I’m temporarily working double shifts—at least until I can break free. I’m temporarily raising my little brother—since apparently our actual mother doesn’t give a crap about either of us. And I always end up as nothing but the temporary girlfriend—the flavor of the week for every guy who’s heard the rumor that I give it up so easily.

At least Drew Callahan, college football legend and local golden boy, is upfront about it. He needs someone to play the part of his girlfriend for one week. In exchange for cash. As if that’s not weird enough, ever since he brought me into his world, nothing really makes sense. Everyone hates me. Everyone wants something from him. And yet the only thing Drew seems to want is . . . me.

I don’t know what to believe anymore. Drew is sweet, sexy, and hiding way more secrets than I am. All I know is, I want to be there for him—permanently. 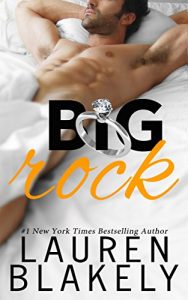 It’s not just the motion of the ocean, ladies. It’s definitely the SIZE of the boat too.

And I’ve got both firing on all cylinders. In fact, I have ALL the right assets. Looks, brains, my own money, and a big c&$k.

You might think I’m an as%*$le. I sound like one, don’t I? I’m hot as sin, rich as heaven, smart as hell and hung like a horse.

Guess what? You haven’t heard my story before. Sure, I might be a playboy, like the NY gossip rags call me. But I’m the playboy who’s actually a great guy. Which makes me one of a kind.

The only trouble is, my dad needs me to cool it for a bit. With conservative investors in town wanting to buy his flagship Fifth Avenue jewelry store, he needs me not only to zip it up, but to look the part of the committed guy. Fine. I can do this for Dad. After all, I’ve got him to thank for the family jewels. So I ask my best friend and business partner to be my fiancée for the next week. Charlotte’s up for it. She has her own reasons for saying yes to wearing this big rock.

And pretty soon all this playing pretend in public leads to no pretending whatsoever in the bedroom, because she just can’t fake the kind of toe-curling, window-shattering orgasmic cries she makes as I take her to new heights between the sheets.

But I can’t seem to fake that I might be feeling something real for her.

What the hell have I gotten myself into with this…big rock? 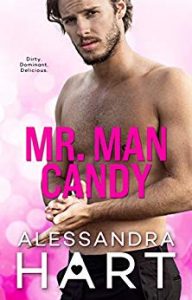 Going to a destination wedding should be fun, right? Not when there’s a +1 on the invite, and you’re painfully single. I don’t want to face my family without a date, so I’ve told them all about my gorgeous, charming, all-around-amazing boyfriend. The only problem? He doesn’t exist.

He’s also my only option, and surprisingly, he agrees to be my fake boyfriend during the wedding festivities. Neither of us know what we’re really getting into with this game of pretend, though. We started off as enemies, but suddenly, I don’t hate his guts. Suddenly, his smirk is more dangerous than annoying… and suddenly, my fake feelings have turned very real.

So maybe he’s not just man candy after all.

The island weather isn’t the only thing heating up, because I might just be falling for my very fake, very handsome and very off-limits boyfriend… 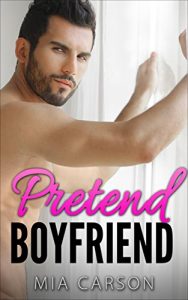 Grace
I’m deep in debt and the loan shark is after me. Enter Chase, a billionaire playboy. He wants to hire me to play his fiancée for the weekend. Not a problem. I need the money, he needs me. I can work with that. I am the leading lady in my play, and playing the part of a love-struck fiancée for a weekend can’t be that hard. As long as he plays his part. But he’s a bad actor. No way his touch is fake. His kisses have to be real. And his body… his rock hard body is as real as it gets.

Chase
I’ve had my share of women wanting me for my money and body, and I was done! Not even the fiery hot, talented actress can change my mind. But Grace is the right person for one tiny role – a loving fiancée for a weekend cruise with my family. No audition required. We struck a good deal – one weekend as my perfect fiancée. That’s it. But the weekend didn’t go exactly as I planned, though it wasn’t her fault. She played the role well. Perhaps too well. Even in bed.

Pity it was all fake.

PUBLISHER’S NOTE: PRETEND BOYFRIEND is a standalone romance novel with a happy ending and no cliffhangers! 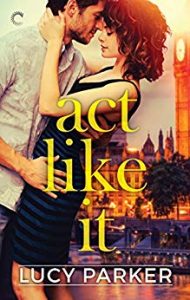 This just in: romance takes center stage as West End theatre’s Richard Troy steps out with none other than castmate Elaine Graham

Richard Troy used to be the hottest actor in London, but the only thing firing up lately is his temper. We all love to love a bad boy, but Richard’s antics have made him Enemy Number One, breaking the hearts of fans across the city.

Have the tides turned? Has English rose Lainie Graham made him into a new man?

Sources say the mismatched pair has been spotted at multiple events, arm in arm and hip to hip. From fits of jealousy to longing looks and heated whispers, onlookers are stunned by this blooming romance.

Could the rumors be right? Could this unlikely romance be the real thing? Or are these gifted stage actors playing us all? 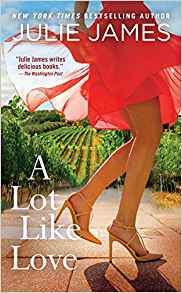 An FBI agent and an heiress have to get up close and personal on an undercover assignment in this thrilling romance from the author of The Thing About Love.

As the daughter of a billionaire and the owner of the city’s top wine store, Jordan Rhodes is invited to the most exclusive parties in Chicago. But there’s only one party the FBI wants to crash: the charity fund-raiser of a famous restaurateur, who also happens to launder money for the mob. In exchange for her brother’s release from prison, Jordan is going to be there—with a date supplied by the Bureau.

As the top undercover agent in Chicago, Nick McCall has one rule: never get personal. This “date” with Jordan Rhodes is merely an assignment—one they’re both determined to pull off even if they can’t be together for five minutes before the sarcasm and sparks begin to fly. But when Nick’s investigation is compromised, he and Jordan have no choice but to pretend they’re a couple, and what starts out as a simple assignment begins to feel a lot like something more…

The Fill-In Boyfriend by Kasie West 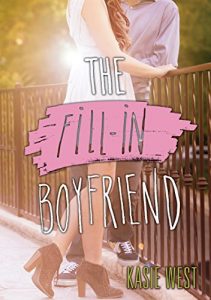 When Gia Montgomery’s boyfriend, Bradley, dumps her in the parking lot of her high school prom, she decides to do the unthinkable…convince the cute guy waiting to pick up his sister to pretend to be her boyfriend for the night. The task is simple: two hours, zero commitment, a few white lies.

The problem is that days after prom, she can’t stop thinking about her fill-in boyfriend. But can Gia turn her fake boyfriend into a real one without exposing her lie and possibly destroying her friendships and her newfound relationship?

Smartly observed and wonderfully romantic, Kasie West’s talent shines in this tale of one girl’s unexpected quest to find love…and possibly herself.