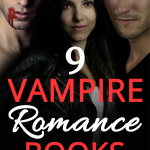 I have to admit, I love vampire books. I don’t care if you classify them under Urban Fantasy, or paranormal romance, or vampire romance, as long at there’s some romance in there I’m good.

Now, I’m making some assumptions with those post, largely that you’ve already heard about some of the big players, like Bella Forrest, Stephenie Meyer, and Laurell K. Hamilton. I’m hoping to introduce you to some of the hottest vampire books around or – depending on your definition of hot – at least something you haven’t read before. Hopefully I’m adding at least one book to your to-be-read-list (includes publisher’s descriptions).

The Vampire Gift 1: Wards of Night by E.M. Knight

When 17-year old Eleira wakes up in a strange, unfamiliar room high above the redwoods of California, she has no idea what’s waiting for her in the dark.

An ancient sanctuary locked away in time…

And a wicked queen determined to do anything to hold on to her rule.

Caught between three vampire brothers and coveted for her bloodline, Eleira is swept into a world of supernatural magic where nothing is as it seems and betrayal lurks behind every corner. She must fight for her survival or risk being made prey for the very creatures who keep her there. But when she discovers a dark, twisted prophecy with her at its center, she is pulled deep into the heart of The Haven… and realizes that the vampires she seeks to escape might just be the key to her salvation.

Born into a life of secrets and service, Chrysabelle’s body bears the telltale marks of a comarré — a special race of humans bred to feed vampire nobility. When her patron is murdered, she becomes the prime suspect, which sends her running into the mortal world…and into the arms of Malkolm, an outcast vampire cursed to kill every being from whom he drinks.

Now, Chrysabelle and Malkolm must work together to stop a plot to merge the mortal and supernatural worlds. If they fail, a chaos unlike anything anyone has ever seen will threaten to reign.

Things do go bump in the night.

Running from a tragic loss, worrying over a missing brother, and flustered about dreams he can’t explain, Michael James searches for a peaceful place to call home. A quaint little town on the Florida coast promises to be just what he needs to start a new life.

Then myth clashes with reality, and Michael’s life is upended. Vampires, werewolves, and other magical paranormals prowl the city of Mystic Bay, his new home.

And not all of them are friendly.

Clayton Night, a seductive, powerful vampire, desires more than Michael’s blood—he wants Michael for eternity. The mighty
Clay Night has fallen, but can his love keep Michael safe from an enemy seeking revenge?

As darkness closes in, Michael has a choice to make—a short mortal life or an eternity of love and danger?

*Previously published as Darkness Awaits. This book has been revised and expanded considerably from its original version to alter both characters and plot events to enhance the reader’s enjoyment.

You think it’s safe to walk alone at night. It’s not.

You think the only threat is other humans. It’s not.

And I’m about to become one of them.

My name is Arianna Spero. I was an ordinary girl, living an ordinary life, until my mother lapsed into a coma. Now, I am her only hope. She made a deal with the devil, and on my 18th birthday he came to collect. But there’s a way to save her. There’s something the princes of hell want more than my mother.

So I signed my soul away and promised to pick a prince to marry. I would take the blood oath, become one of them, and give them an heir. I would become a princess of hell, and my mother would live.

But the princes are keeping secrets from me.

Secrets that could shatter everything.

The Vampire Wish by Michelle Madow

Annika never thought of herself as weak—until vampires murdered her parents and kidnapped her to their hidden kingdom of the Vale.

As a brand new blood slave, Annika must survive her dangerous new circumstances—or face death from the wolves prowling the Vale’s enchanted walls. But sparks fly when she meets the vampire prince Jacen. She hates the idea of falling for the enemy, but her connection with the mysterious prince could be the key to her freedom.

Because if she can convince him to turn her into a vampire, she’ll finally have the strength she needs to escape the Vale.

To the vampires who dominate each quadrant of the Lydian Dynasty, I’m only known as “Blackbird”–a masked vigilante who, at nineteen, is already public enemy number one.

To what’s left of humanity, I’ve been called a superhero, a title I neither welcome nor deserve. My only objective is to offer the enslaved what was stolen from us …

However, a failed plan lands me in the last place I imagined, at the mercy of all four Dynasty princes–Julian, Levi, Roman, and Silas. They’re monsters, each with a heart rumored to be as cold as his icy skin. And what’s worse, thanks to the slip-up, my fate is suddenly theirs to decide.

It’s up to them whether I’ll swing from the gallows, and I’ve given them every reason to sentence me to such a fate. Yet, I felt something unexplainable when our paths first crossed.

Something that gives me hope.

We should be one another’s worst nightmare. Only, I’m beginning to wonder if, somehow … these four princes might be my saving grace.

“You may not be aware, ma douce, but not all vampyre have a kindred, some will live out their existence without such beauty in their lives. I have waited five hundred years for you.”

Vampires, shapeshifters, ghouls and magic-users abound in a world where the Norms, (those humans without paranormal abilities), are ignorant of the creatures of the night and the supernatural species that live alongside them.

Lucinda Monk is a bank teller by day and a vampire hunter by night, but she wasn’t always a part of this world. Thrown into a heady mix of powerful people and sensual beings, she’s had to find her way practically blindfolded in amongst the creatures of the night.

Lucinda, though, is a capable and realistic kind of girl. Her motto: Never Show Fear.

But there’s something different about Luce. Something those creatures she hunts want. So, in order to stay one step ahead of the enemy, she has to let the enemy in. In all his compelling, seductive and delicious ways.

Sleeping with the enemy has never meant so much before. But can she trust him?

From the urban streets of the city to the dark alleys and sinful bars that promise a wickedness a girl from the farm has never before been exposed to, Lucinda gets drawn irreversibly into the dark side of life.

And if the Master of the City has his way, she will always be his. For eternity.

The Last Vampire by R.A. Steffan

There’s a smokin’ hot dead guy locked in my garden shed. That part’s bad enough. But now, he’s trying to get out.

Growing up, my father always told me that I’d come to a bad end, just like my mom did when I was a kid. Hearing that kind of stuff when you’re little eventually gets to a girl, but I can’t say I ever expected my ‘bad end’ to involve an angry vampire with a severe case of iron deficiency and a panty-melting English accent.

Maybe I shouldn’t be surprised. Ever since my mother was assassinated, I’ve felt like there was something vast and frightening hidden beneath the fabric of the world. Something none of us are supposed to know about.

So far, finding out I was right hasn’t been nearly as satisfying as I’d hoped. I guess the trick will be staying alive long enough to shout ‘I told you so’ from the rooftops.

But before I can do that, I really need to figure out if the vampire who just bit me is one of the good guys or not.

A lost virgin vampire queen. Two vampire knights sworn to protect her. It’s about to get very hot… and bloody…

Ever since her mother was murdered by monsters five years ago, Shara Isador has been on the run. Alone, scared, and exhausted, she’s finally cornered in Eureka Springs, Arkansas. Out of hope with nowhere else to turn, she’s ready to end it all when two men come to her rescue.

They say she’s a lost queen descended from Isis, and they’re her Blood, vampire knights sworn to protect her. It all seems like a crazy nightmare, until the alpha offers his blood. Then she realizes she’s never wanted anything more. Except maybe his body… and his friend’s, too.

But they’re not the only ones searching for a lost queen. Shara must learn how to wield her new powers quickly and conquer her fears if she intends to keep them all alive.

This is a MMFFM+ polyam series and Shara will never be forced to choose just one. #whychoose